In 2017, Carol Shaw donated to The Strong museum a collection of console games, printed source code, design documents, sketches, reference materials, and promotional objects representing games she created for Atari Inc. and Activision in the late 1970s and early 1980s. Shaw is the first widely recognized female game designer and programmer for a major video game company, making her work a cornerstone of the museum’s collection of more than sixty thousand games and related materials and a thousand linear feet of archival documents. It is especially important for the museum’s Women in Games initiative, which is dedicated to preserving, interpreting, and exhibiting the often underrepresented contributions women have made to the gaming industry.

As the daughter of a mechanical engineer, Shaw became interested in electronics at an early age. She obtained BASIC programming experience in high school and went on to earn a bachelor's degree in electrical engineering and computer science at the University of California, Berkeley, in 1977. She then remained at Berkley for another year to complete a master’s degree in computer science. In 1978, directly after completing her degree, Atari hired Shaw as a microprocessor software engineer.

Shaw’s first task at Atari was to design a video game version of the horseback-mounted sport of polo. In 1978, Warner Communications owned both Atari and Ralph Lauren, the latter of which was releasing its first line of fragrances—Polo for men and Lauren for women. Warner executives decided to merge the introduction of the game and the men’s fragrance by creating an elaborate display in the New York City Bloomingdale’s store, with the Polo fragrance on sale alongside Atari 2600 video game consoles, which would play a polo-themed game.

Shaw’s donation to The Strong includes a folder dedicated to her Polo video game. It illustrates the incredibly detailed work that went into designing and programming it. She began by researching the traditional sport of polo, and her materials include photocopies of encyclopedia articles explaining the history of the game and the mechanics behind how it is played. The heart of her donation includes design documents that focus on various elements of the video game’s creation, including mathematical calculations on velocity and acceleration for the ball, the angles at which it could be hit, and how far it would travel (fig. 1). She made similar calculations for the movement of the horses (fig. 2). 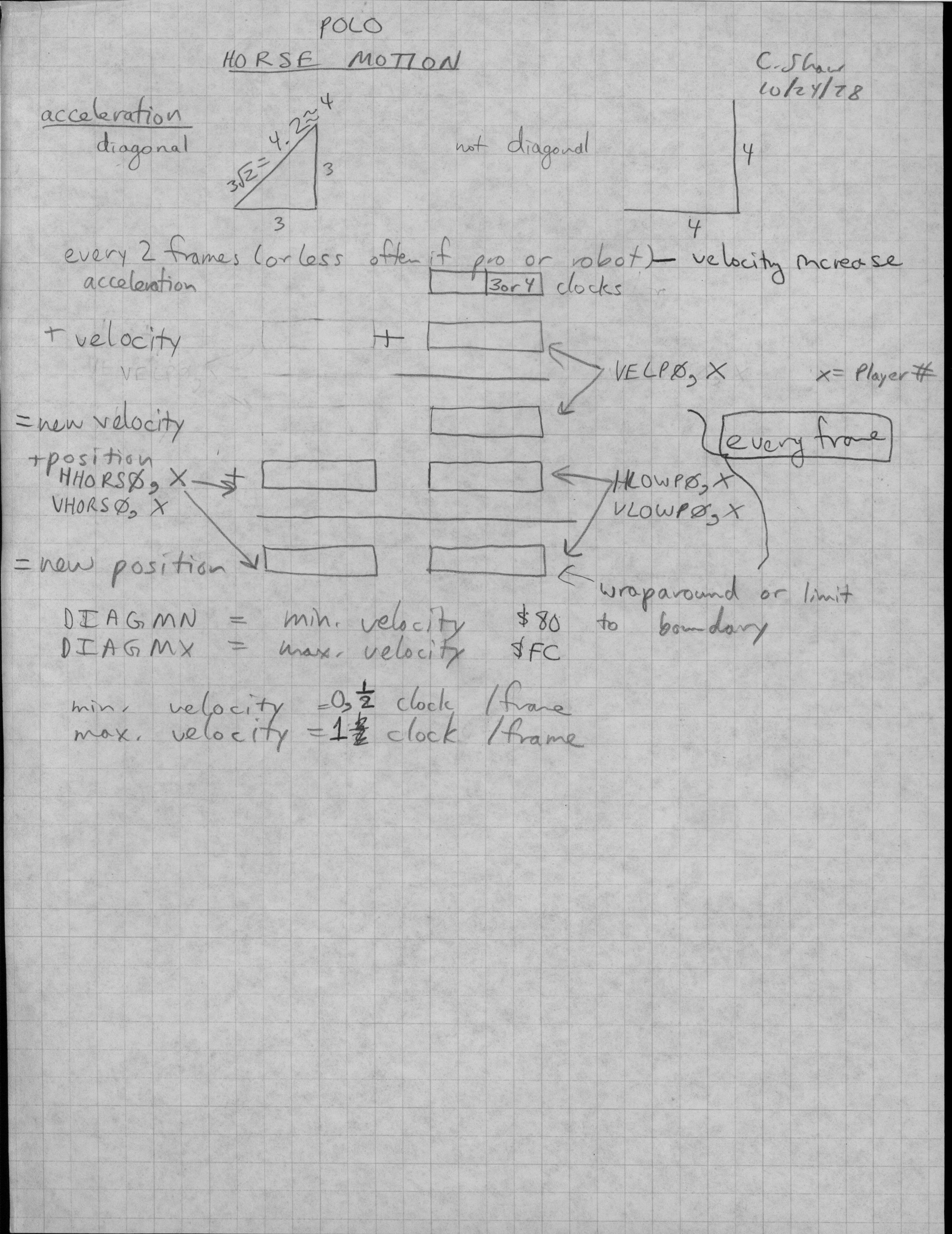 Other documents include game design notes, such as how the number of players can alter the gameplay, and descriptions of how ball speed and motion should be programmed to appear (fig. 3). Though slightly difficult to see in the hand-drawn versions, the game’s graphics, including the design of the player and horse, were done in a Venetian-blinds style of alternating lines, which Shaw drew herself (fig 4). 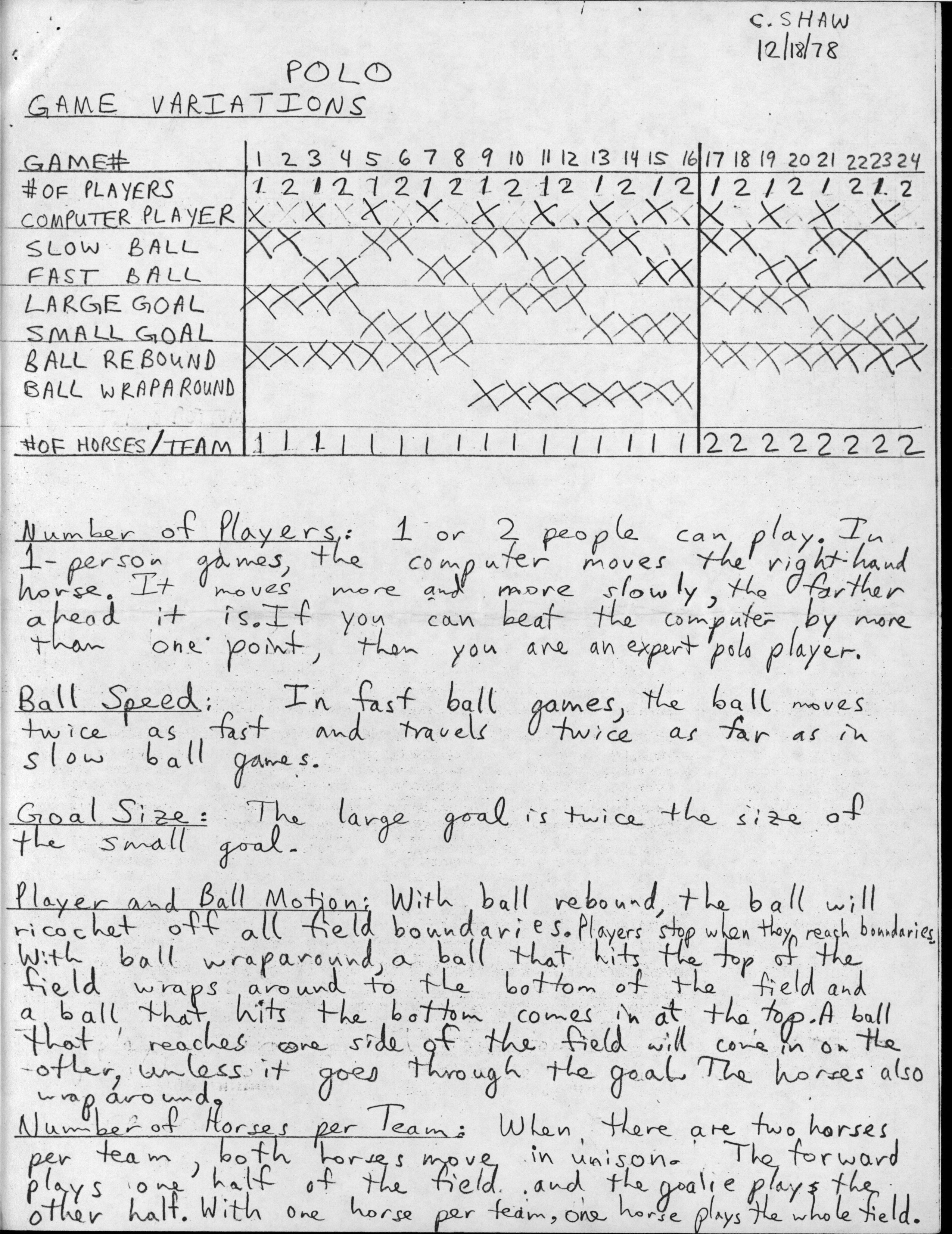 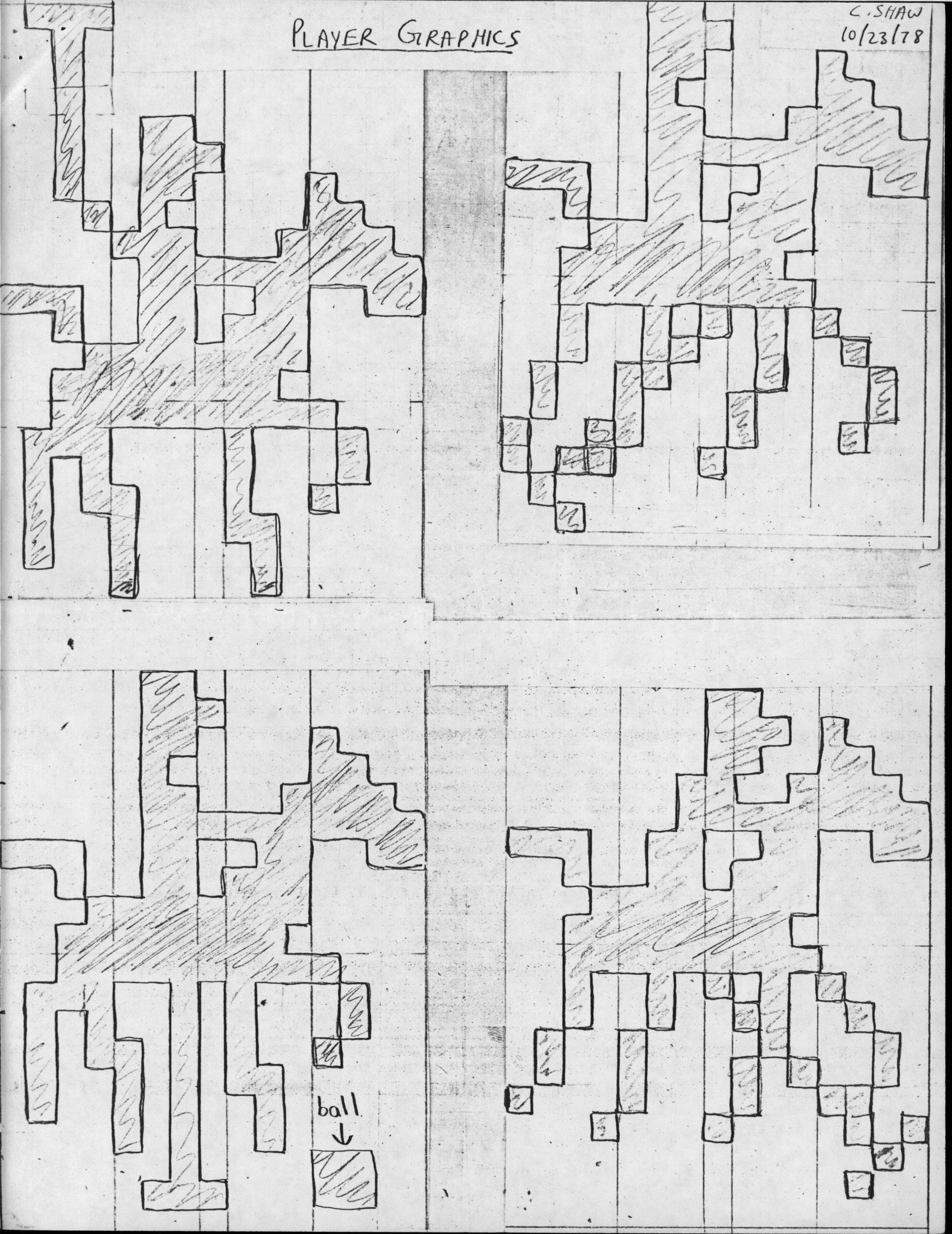 Following the game’s completion, Atari sent copies to George Friedman, cofounder of Warner Cosmetics (a joint venture between Warner Communications and Ralph Lauren), the producers of the Polo cologne. Shaw’s donation includes a letter from Friedman to Ray Kassar, president and CEO of Atari, thanking him for the game and detailing his marketing ideas for the project (fig. 5). For reasons still unknown, however, the plan never came to fruition. Ralph Lauren launched the cologne as planned, but without the Atari tie-in, and the video game remained unpublished. But Shaw’s donation includes the original erasable programmable read-only memory chip (EPROM) for Polo (fig. 6), along with the game’s printed source code, both containing the game’s production date, which further proves the game’s existence. Polo was finally released in 1996, as a bonus game on Stella Gets a New Brain, a compilation CD-ROM containing games released for the Atari 2600 Starpath Supercharger accessory. 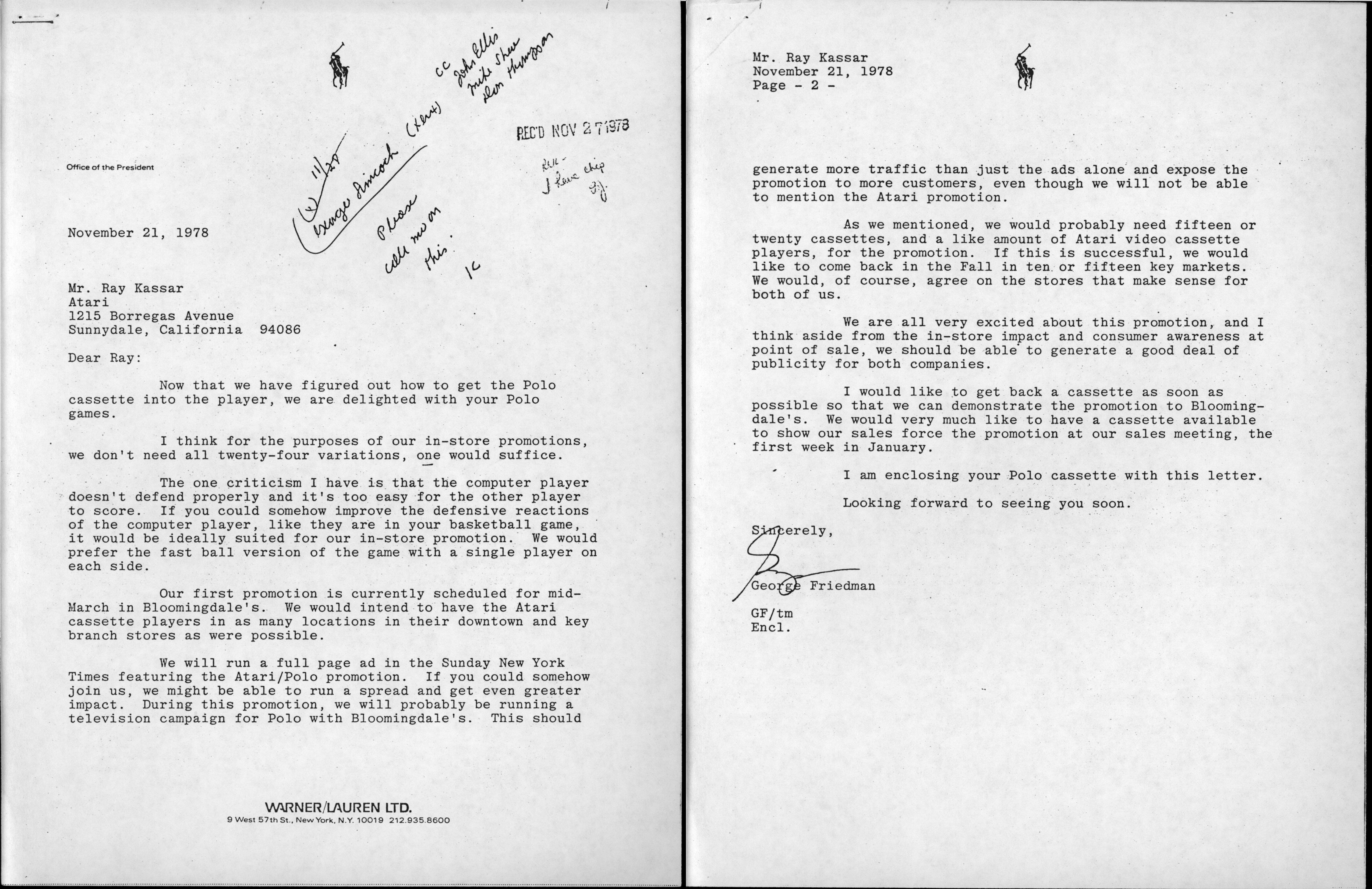 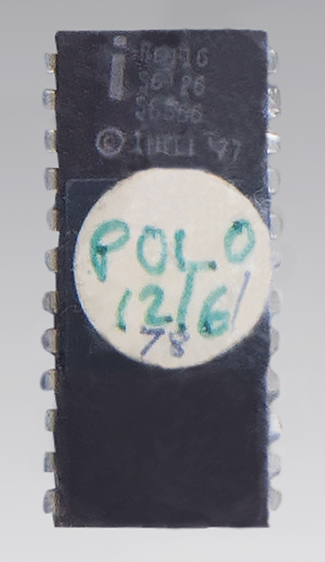 Polo EPROM, 1978. (Image courtesy of the Brian Sutton-Smith Library and Archives of Play at the Strong, Rochester, NY.)

Shaw’s donation is critical to the preservation of video game history, especially in telling the story of the roles women played in the industry. Her records are stored in museum-standard, acid-free archival folders, and the Polo EPROM has been backed up in a digital format. One of the museum’s long-term goals is to obtain the funds to scan archival documentation, which will increase the accessibility and longevity of its paper materials. Scans have already been made of several page of Shaw’s assembly code, which came to the museum as printouts on highly fragile thermographic paper (fig. 7). Several reproductions of the Polo design documents are currently on display in the museum’s Women in Games exhibit, allowing guests to see firsthand examples of women’s contributions to gaming history. 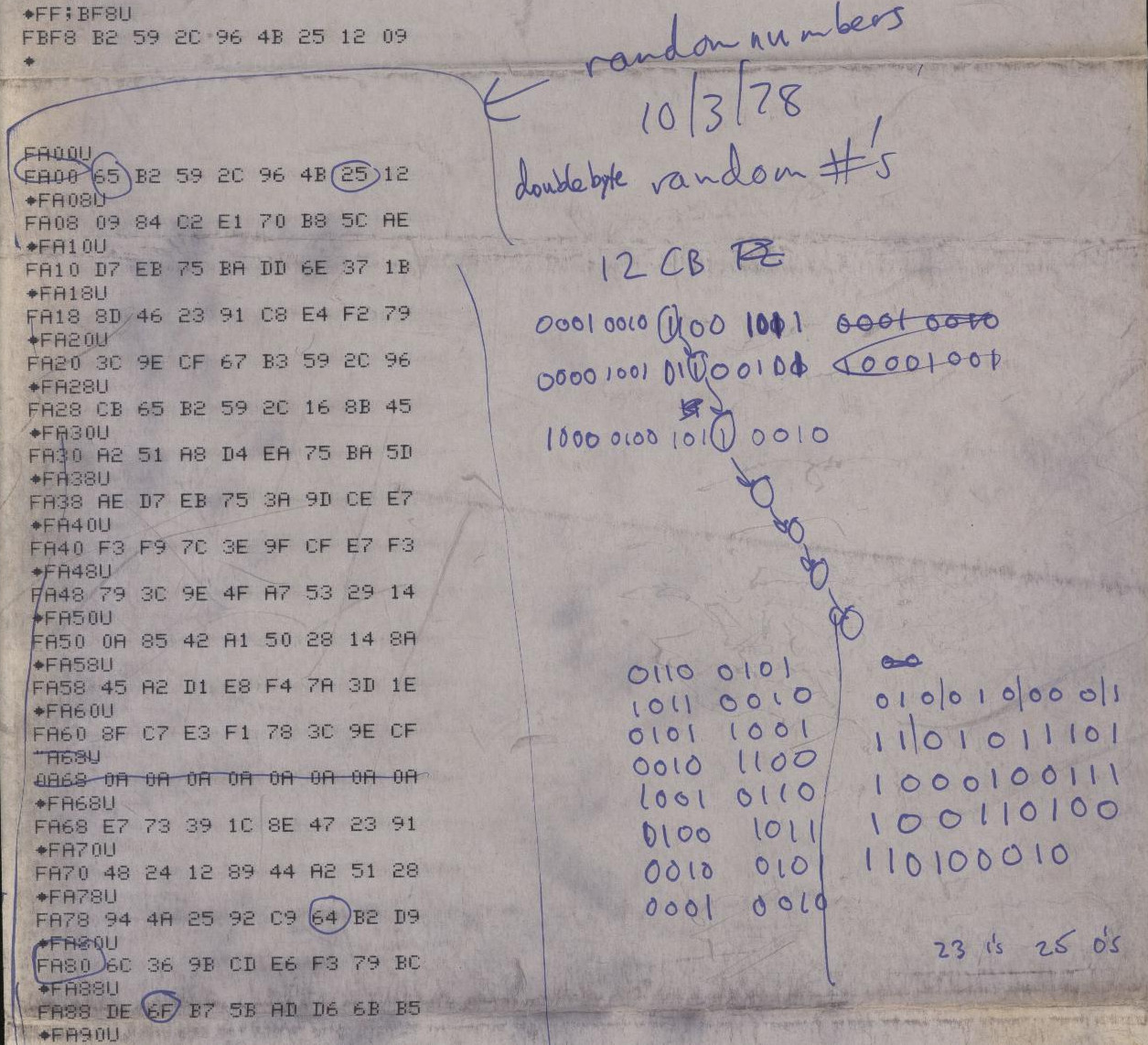 Polo code printout on thermographic paper, 1978. (Image courtesy of the Brian Sutton-Smith Library and Archives of Play at the Strong, Rochester, NY)

A key question I often receive as a curator is why we go to such lengths to preserve these and similar items. After all, it’s “only a video game.” It’s not even old! And despite my constant clarification that museums as a whole do not collect things because they are old, they collect things because they have historical significance, the first part of that question still remains: why video games?

The museum’s Brian Sutton-Smith Library and Archives of Play hosts researchers from countries across the globe, and while we have more to offer than just electronic games materials, those collections are by far the most heavily accessed. Many times they are used by students of game history or game design, but we’ve also had sociologists, psychologists, and musicologists examine our holdings. This is because games, like all play, touch on aspects of the human condition beyond the simple act of creating or playing a game. Play tells us who we are, what we like, and how to express these and other thoughts. Additionally, since the making of a game crosses so many boundaries, studying the game creation process allows us to look through lenses beyond computer programming. It touches art, advertising, business development, creative writing, music, and so much more.

So what can Carol Shaw’s documents teach us? At their most obvious, they are excellent resources for the study of game design and development. During Shaw’s tenure, games were created mainly by one person. She did all her own design, programming, coding, and art. Today, most AAA games are made by huge teams of people at vast studios, with each person specializing on one particular aspect. Ironically, this has come full circle with the development of indie games and apps, which are often created either individually or in small teams. Shaw’s documents also demonstrate the vast amount of creativity needed by programmers of her era. Entire games had to fit in such small amounts of memory that literally no byte could be wasted. Her documents are so full of mathematical equations because every one of them had to be perfect, and every spot of memory used in the most efficient way possible.

But one of the most interesting stories told from her documents relates not to the game itself but its entire reason for existing. Even today, when gaming is so ubiquitous, very few people would think of video games in relation to cologne. And yet, this connection was somehow made back in 1978, when the home console video game market was still in its infancy. The letter from George Friedman to Ray Kassar shows how seriously both companies took this venture, though even within the letter there were signs of how unusual a step this was. For instance, Friedman opened the message with the line, “Now that we have figured out how to get the Polo cassette into the player …,” intimating that neither he nor his staff were versed in playing video games. He seemed to have difficulty loading the Atari 2600, and he called the cartridge a cassette, demonstrating that he wasn’t used to gaming terminology. Yet despite his unfamiliarity, he was clearly excited about the collaboration with Atari and had a large press lineup waiting to advertise the products.

Of course, the biggest question of all is one Shaw’s documents can’t answer: why did the collaboration fail, despite all this preparation and enthusiasm? The cologne clearly sold well, and—though the Polo game itself remained unpublished for nearly two decades—Atari went on to become a giant in the home console field. But this odd mash-up of game and beauty product never got off the ground. We may never know exactly what happened, but the documents still provide important historical context not only for students of game history, but for students of marketing, advertising, and business. It might also lead researchers to study whether similar ventures have been made, linking games to seemingly unrelated products. It is also a good source for those interested in unreleased games in general, and the stories behind their development. What drives a company to put time and effort into something and then not release it, despite its completion? Was there a reason Atari didn’t simply release Polo, even if it was without the collaboration of the Polo cologne?

While archival documents such as these provide answers to many questions, in some cases, they provoke even more. Either way, they are an unparalleled resource for multiple disciplines. And as the first game designed and programmed by a woman for a major video game company, Polo represents an iconic moment in the gaming industry.